I haven’t drawn much in quite awhile because of how long I spend on pictures, but recently I downloaded “Art Academy” on the Wii U and started playing on it. For my first sketch, I decided to do a beach scene. I erased what I was doing several times before being satisfied with a background.

It started out like this. I finished my background, and then I stared sketching out Leander and Valli. I was indecisive about how I wanted them, and erased and re-drew them several times to get ideas. 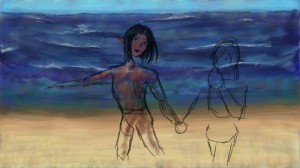 Once I decided on a pose I started working on some color. This took quite awhile but it was rather fun. The background was in “chalk”, and I did Leander and Valli in “colored pencils”. The background was separate from them, so I was able to draw and erase them without messing up my background. 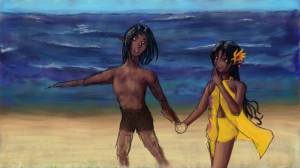 It’s not perfect, but I finished them up today. This is based on a scene I plan on drawing in a future book. I imagined Valli with a yellow swimsuit and a see-through top, with purple flowers decorating one side. I could have done more with details, but I think it’s turned out all right.
On Pressea, swimsuits are generally “swimming shorts” for everyone, including women, but some people who are shyer or more modest (such as Valli) will wear something to cover up their chest as well. 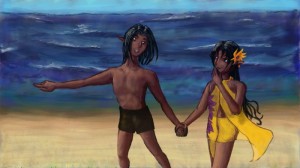 It’s been a long time since I’ve drawn anything, so I must say it was enjoyable. I purchased the program on a whim because it was $4 and I had $9 sitting on my account, and for $4, I’d say it’s worth it. Being able to draw using a touch screen is nice.
“Art Academy” has a lot of limits, but considering the price I liked how it worked and I think I will continue drawing on it after this.

Leander and Valli, drawn by Junsu. In Outlander Leander: Vol.2.5, Valli is taking a break during a performance and leans on Leander’s shoulder to rest. 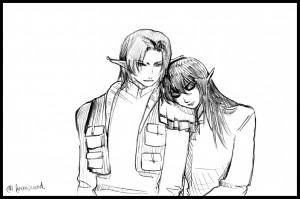 Leander attempting to keep up with Lorough during his morning job, a drawn by Cherimsy. It’s been awhile since artwork has been posted! 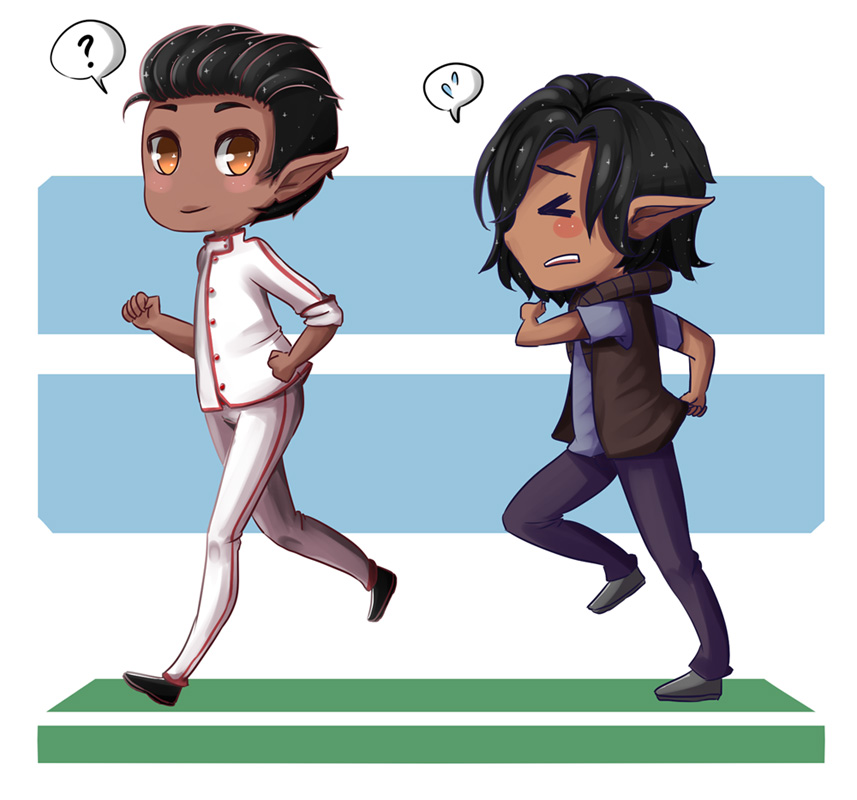 Lorough, Leander and Rykiel hanging out, as drawn by Rikaida. 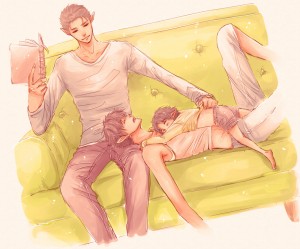 I really adore the look of this one. It looks like Leander as a toddler has worn Rykiel out. It’s always nice to have stuff of Leander from before he turned seventeen. It also shows Lorough as a young man.

Some more examples of sketches that Lylith made for Coronation Necklace.

Probably one of the most complicated pictures thus far, we discussed how to do the musical tree in Wilten Crags quite a bit.

These were different ideas for dealing with the chimes.
The first started off far too mechanical. 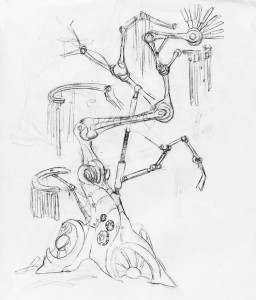 The second toned down how mechanical the tree looked, but I was looking for something similar to a willow tree. 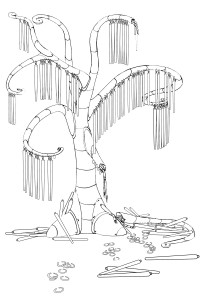 In the end we went with a less detailed and more distant look, with the tree looking fairly normal save for the coloring. It made more sense than attempting to draw thousands of chimes, which would take forever.
I love the overall feel of the finished product even if I would still make some adjustments. It has the gloomy feel of Wilten Crags and is an excellent opening picture for the story.

Some people might be wondering how the artwork for the series is decided on, and how many sketches are made before it’s finished.
I work with Lylith, giving her the details and telling her things to change when going through the artwork. Is all the artwork exactly how I pictured it in my head? Of course not. When adding artwork to a book it’s necessary to realize that the artist’s artistic vision is going to be part of it.

I told her that I wanted Axe and General Glaive on the upper portion of the cover, with Leander being “loomed over” somehow (of course I gave more details than that, but that’s a brief summary).
At that point she came up with a way to try and get the look I was going for.
Here are some examples sketches we went over for the cover of “Coronation Necklace”. 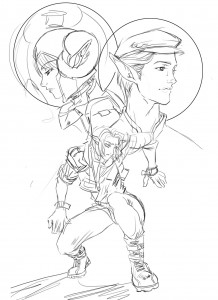 As you can see, that’s not how it looked when finished. A wall was added behind Leander, and the actual cover has him more at an angle rather than straight forward.

Some adjustments were made to figure out how Leander should be positioned.
One of the things Lylith mentioned is that in the final product Leander is positioned in a way that is more typical for a female character – something that worked for both of us.

The same happened with the back cover. For the picture of Ellora accompanying the letter, I asked for her to look irritated, and Lylith made some sketches. 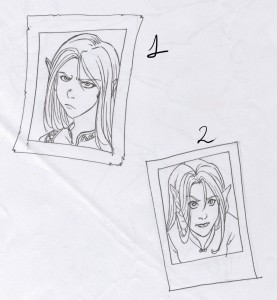 Again, adjustments were made. I went with the first sketch, but asked her to make Ellora look slightly less angry.

Working with an artist on a book communication is important, and knowing when to let go is important, too. It’s no longer just your work but partially their work, too. I’m fortunate to have Lylith to work with, because she’s a great person to talk to, a hard worker and is extremely patient, and there are plenty of things that have ended up in the artwork for the book that I never had planned.

One example of this is the swirlies that ended up on the army hats. 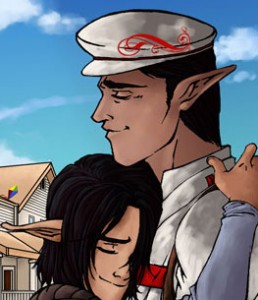 If you read the text, there’s never any mention of there being red swirls on their hats. This was completely artistic license, and it’s this type of thing where the art is based on the book, and the book can come around to be based on the art (by adding the swirls as canon later on).

That has been my experience working with an illustrator on the book. I’m blessed to have such a great artist to work with, and being a fan of artwork in books I hope I see more authors and artists working together in the future. 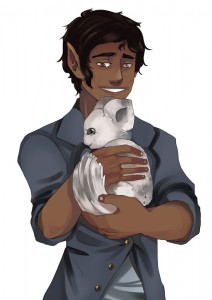 Rykiel, Leander and Lorough hanging out at Lorough’s home, as drawn by Landersova. Leander as a child, attempting to scare Rykiel from behind the couch with a giant, plush bird. 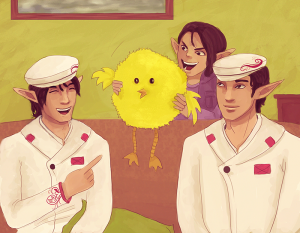 With the recent release of Coronation Necklace, some people might be wondering if I have anything done yet on the third book.
And with that I’ll answer with a picture drawn by Nupao.

The General’s Bust has a completed rough draft thus far. It needs to be combed through and re-written before given to an editor.

Leander, Ellora, Deckard and Lorough chibis, as drawn by Chrecand. 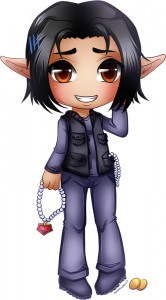 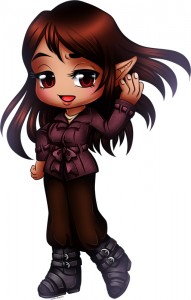