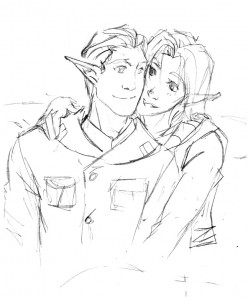 Different cultures have personal space bubbles. In Nagdecht, physical proximity is a large indicator of how close two people are mentally because physically touching is considered important to bonding.

For that reason it’s not unusual for Leander to have a lot of physical contact with his dad. It can come in many forms; from hugging, to sleeping next to each other to wrestling. Leander’s desire to be close to his father is seen as a good thing and an indication that they have a strong relationship.

In the same way, how people physically interact is usually an indicator of the type of relationship they have.

Where people are placed in relation to other people is also a symbol of how important they are. In Nagdecht’s castle, the king and the two generals sleep on the top floor, putting them above everyone else. General Glaive’s personal soldiers sleep just one floor below them; clear evidence to the rest of the kingdom that they’re the most highly ranked of all the troops, even if they have no official titles declaring it so.

Leander and Lorough have a highly unusual setup in their house. While Lorough sleeps in the basement, Leander sleeps on the second floor.